-- Earn 5% Off Your Next Purchase! Order Now And Receive A 5% Coupon USA Only 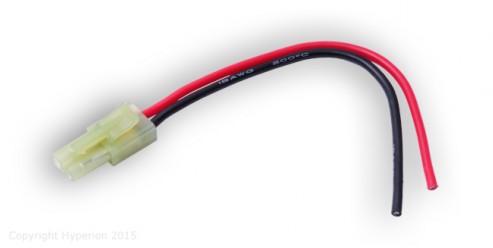 Tamiya connector is a type of DC connector, commonly used on radio-controlled model vehicle battery packs and chargers. The connector comes with a locking mechanism which are unlikely to come out loose when in use and are therefore reliable for Rc applications. The connector physically isolates the positive and negative wires, this makes them safe for use in relatively low-current applications (up to about 15A) in dirty conditions (for example, model boats or RC cars used outdoors). The connectors physical shape also makes it foolproof in reverse polarity connections avoiding damage to important electronics.

Included with the package:

General Information: The usual wiring has the positive (red) wire running to the terminal with a square profile, and the negative (black) wire running to the half-circle, half-square terminal. This is true for both genders of connector. The female sockets are in a male housing and the male pins are in a female housing. The male pins (female housing) connector is usually on the battery side. In electrical and electronics engineering, the convention is that gender refers to the metal contact parts of a connector in order to avoid ambiguity. A large number of hobbyist retailers selling these connectors refer to the gender of the plastic housing, which is against convention and can lead to errors.